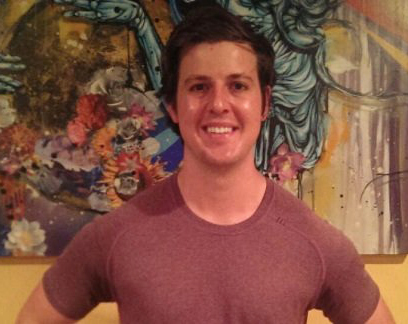 Outgoing Aubry Carmody is no stranger to challenges – especially physical ones.

This young athlete has played any number of sports in his 26 years. He loves them all – football, baseball, tennis, basketball and Crossfit.

But it wasn’t until taking a finance job in Chicago after graduating from Ole Miss when the benefits of Yoga really grabbed him.

“I had been practicing Yoga off and on since about my junior year of college. I got started out of curiosity,” Aubry says. “In Chicago, I worked long, stressful hours every day. I knew I needed to do something to counteract what I was doing to myself, sitting at my desk for hours on end. I knew my joints and muscles could use the benefits of proper stretching as well as focusing on the mental aspect of it.”

Aubry left Chicago about two years ago, taking a job as the Assistant Director for Camps Mondamin and Green Cove here on Lake Summit, where he and his five siblings spent their summers growing up. It was an opportunity he couldn’t pass up.

But with traveling a lot for the new job, Yoga had to take a back seat until Aubry injured his elbow last spring while working out at the gym. Recalling how poses can increase flexibility, Aubry knew he had to return to the mat.

“After leaving Yoga for those two years, I found my body was not as fluid or lean as it had been while practicing in Chicago,” Aubry says. “I knew I needed to make a change to get back to my old self and I couldn’t be happier.” He now has better range of motion in that arm, has slimmed down a bit and is sleeping better at night.

“I think practicing Yoga has given me a better and calmer outlook on life,” Aubrey says. “I have always been a happy-go-lucky individual for as long as I can remember. But sometimes the transition to adulthood and living on your own can be daunting.

“But having Yoga to look forward to throughout the day and truly giving my all in class has helped me through these transitions and allows me to truly focus on what really matters in my life.”

Aubry still runs long distances and mountain bikes, and believes that Yoga complements his other sports passions. “Yoga allows me to push a little harder knowing I will be able to work out any kinks or muscle fatigue during the asanas.”

Aubry may be in the minority when it comes to the number of men joining him in class, but YAM instructors have made him feel welcome from Day 1. Aubry, himself, makes it a point to encourage his fellow male Yogis in class, giving them a High-Five when all is done.

“I would like to tell people who might be apprehensive about coming to just know you are not alone and we are all in it together.

“I am nowhere near the most flexible or gracious Yogi, but I am in there giving it all I got, and I think that is the best thing anyone can do,” Aubry says.