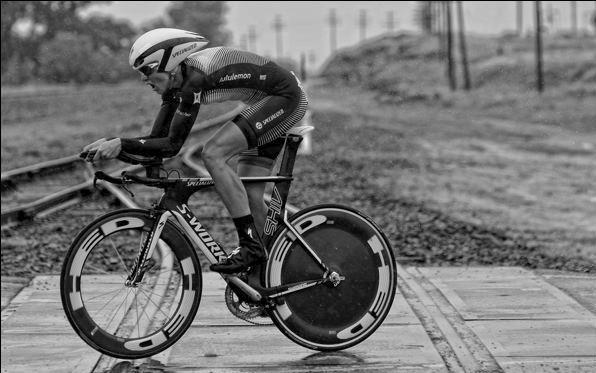 For several years, professional cyclo-cross racer Ally Murphy has put the pedal to the metal, racing on the world’s number one women’s team and, as she says, ‘lucky enough’ to ride with some of the sport’s legends.

But she’s not sure she could have competed as well as she did if it wasn’t for her regular Yoga practice. Those asanas helped her immensely.

“Yoga has helped my cycling on multiple levels,” Ally says. “I feel it’s great for strength, recovery and the mental relaxation. By adding Yoga to my cycling career, I got through some of the highs and lows of the sport.”

When she was on the road, both in the States and in Europe, Ally made a point to practice Yoga 20-45 minutes immediately after a race, just to unwind. It was part of her routine. She began taking Yoga classes in college because she loved how it made her feel, both mentally and physically.

She’s taking a break from cycling now, just competing in the 2016 USA Cycling Cyclo-Cross National Championships, held on the Biltmore Estate in January. Also, Ally and her husband John just found out their expecting their first child.

But that won’t stop her from running her own business, making all-natural nutrition bars, called Ally’s Bars. She developed these healthy snacks in her own kitchen, looking for something that was tasty and that would sustain her through her cycling rides. After sharing them with friends and teammates, the demand increased, so she has since moved the operations out of her kitchen to a manufacturer in Oregon.

Ally’s Bars have a sweet potato base, and are baked with quinoa, dates, nuts and other organic ingredients. They are available online at www.allysbar.com and are now in 150 stores and shops across the United States, many in Henderson and Buncombe counties.

Ally obviously knows what it takes to fuel a body when riding at the highest levels in a sport. She also knows she’ll continue her Yoga practice at YAM, understanding the benefits she receives.

“YAM is my little sanctuary,” Ally says. “The teachers are fantastic and the atmosphere is so warm and welcoming. I love the stability it adds to my daily life. It’s really a positive addiction. It’s a great way to set a positive intention for the day.”