Yoga is for ‘regular’ guys, too 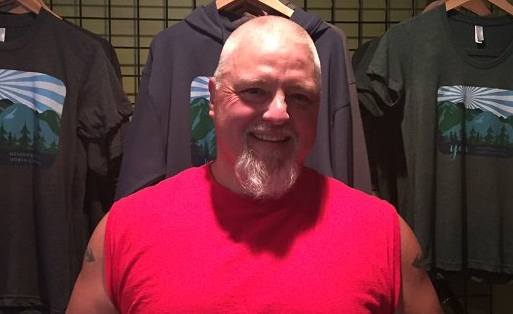 At first glance, Barry Bonnett, a former wrestler, football player, history teacher and coach, looks like one tough guy walking down the street, someone many people would never think was a practicing Yogi.

But as we all know, looks can be deceiving, and Barry wants to prove to himself, and maybe to other men as well, how Yoga can benefit guys, too.

”I remember reading an article a few years back on a former wrestler who got involved with Yoga after a back injury. He became such a convert that he founded a company called ‘Yoga for Regular Guys’ with the goal of convincing men that Yoga is for everyone, not just women,” he says.

Barry has had more than his share of medical problems. They read like a ‘war novel’ – three shoulder surgeries, three neck surgeries, back pain, a heart attack at age 52 and an Achilles injury.

“I realized that my antiquated ideas of fitness needed to evolve. In other words, going to the gym and lifting heavy weights was no longer the answer,” he says.

Upon remembering that “Yoga for Regular Guys” article, Barry began to search the Internet for Yoga classes in the area, and found out that YAM instructor Sonya Klepper was offering a Beginner Yoga series, which he signed up for immediately. He was hooked on Yoga after the six weeks, and has enrolled under YAM’s 12-month unlimited special.

His pain is subsiding, and he’s becoming more flexible. “I’m here until they run me off,” Barry says.

He has taken several different classes: Power Flow, Slow Flow, Therapeutic and Yin, and loves all of them. He still struggles with what he calls the “bird poses,” Pigeon and Crow, but knows he must leave his “ego at the door,” knowing that his Yoga practice is a journey.

“The staff at YAM has been great. My instructors have all been patient, kind and helpful, especially with those ‘bird poses,’” he says.

“I still get a lot of double-takes when I tell people that I am a practicing Yogi,” says Barry, who now works as an estimator for a concrete company. “I probably don’t fit most people’s idea of the typical Yoga student, but I guess that’s really the point. No matter what size and shape, male or female, physically fit or not, everyone can benefit from a Yoga practice.”