Yoga hits a high note for this singer 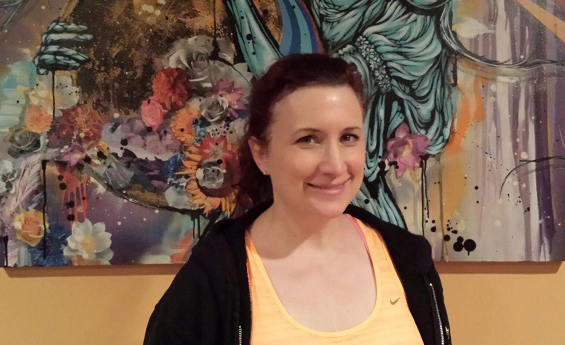 As a vocal teacher at Brevard College as well as a professional jazz and opera singer and dancer who has performed worldwide, Wendy uses breathing techniques and asanas she’s learned from her own Yoga practice at YAM to help her students develop and strengthen their vocal skills.

“Many students understand the concept of breathing, but they have trouble with deep breathing as soon as they attempt to phonate,” Wendy says. “I can put them on their stomach in a low sphinx pose and, once in that position, they can sing and really feel the movement of the abdomen.”

While in class, Wendy asks her students to sit quietly on their mats, helping them become more aware of opening their throats and connecting with their breath.

“They do some gentle shoulder and head rolls, some cat/cows and other exercises that allow them to stretch their side bodies, breathing deep into their intercostals to obtain much more open and free vocal sounds,” she says. “These practices yield a much more productive lesson. It is time well spent and I now consider Yoga an integral part of singing.”

Wendy was convinced from the get-go that Yoga would help her students, as she, herself, has received so many benefits after beginning her practice last March. She had been experiencing a lot of pain in her elbow, and couldn’t continue her regular workouts, which included lifting weights and swimming.

“In fact, at the time I began Yoga, I had reached a point where I couldn’t hold a pencil and the pain had started to affect my shoulder as well,” Wendy says. “After my first workout at YAM, my pain was reduced and after about a month, it was gone!”

She’s been a diehard Yogi ever since.

“This summer, I was preparing a faculty recital and found that incorporating Yoga was not only helping me stay focused on my daily musical practice, but it was helping relieve tensions in my tongue and jaw,” Wendy says. “I was singing better than ever since beginning Yoga so it made perfect sense that I incorporate it in my students’ lessons.”

It’s been a lifesaver.

“I find I have more patience with everyone who crosses my path,” Wendy says. “That’s big for me because I’ve always been a tightly-wound, impatient, no pain/no gain kind of gal. I still have my moments, but I’m getting better.”

She says she honestly feels like she’s at a spa while in class, and finds that the warm room is very comforting – not oppressive at all. To complement her Yoga practice, Wendy also receives “superb” massages from Tish and Erin, ones that rival some of the best around.

Before Wendy moved back to Hendersonville a few years ago to be near family, she spent eight years teaching at Appalachian State University. She was on the road then for several years, working in theater, on various cruise ships and performed for Tokyo Disney. Now, in her spare time, she sings with her vintage jazz group, “42nd Street,” the Asheville Jazz Orchestra, the Russ Wilson Big Band and the Carolina Concert Choir.

And you might have even heard her perform locally at the Flat Rock Playhouse.

Busy as she may be, Wendy hopes to get to Yoga class even more often, finding that her YAM practice leaves her feeling strong and spiritually revived.

“I feel as if I have found a real gem in my own backyard,” she says.